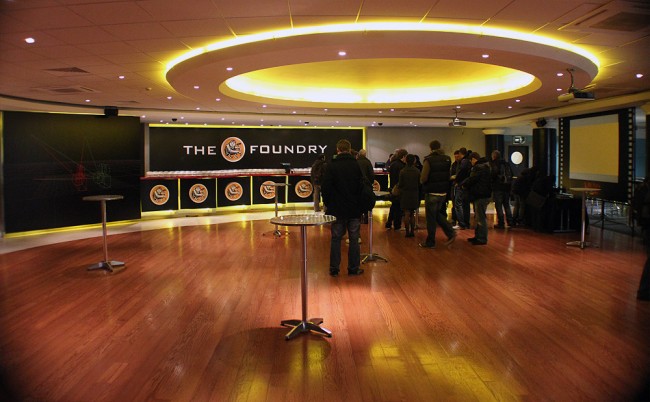 I was at the Foundry’s MasterClass today. An event mainly focused on stereoscopic 3D. It was ‘OK’ overall, a couple of boring promotional presentations! One on Storm which I think it’s not very practical right now(from visual effects pipe line’s stand point) until it has more editing power and camera format support, and the other one from MPC on a very interesting work but a bit boring! (watch the ad)

Of course that’s not all that happened! There was an interesting intro to stereoscopic, the theory and setup at the beginning followed quickly by A breakdown of a shot in The Hole from the VFX Supervisor (John Gajdecki) which revealed some interesting aspect of setting up a 3d rig and the production and post production issues that you might face. You can listen to his presentation below.
John Gajdecki – The Hole.

Next, and rest of presentations in some ways, were promoting OCULA; the stereoscopic post production plug-ins dealing specially with polarizing effect happening when shooting stereo and vertical alignment of the footages.OCULA was apparently heavily used and developed alongside Tron. This was followed by MARI, the 3D texture painting package which is actually a very good tool and it’s new abilities to work with animated geometry and camera to do projection work; not that impressive at it’s current stage for projection since all this can be done inside Nuke in a similar fashion.

Perhaps the most interesting part of the presentation was the stereo conversions methods in Nuke which you can watch below.This highly anticipated part was rather very short and you could see some people, a small group, leaving afterwards. Apologies for the shaky camera! it was all hand held.

There was also a sneak peak of the Nuke 6.3 showing some pretty cool new features such as 3D particle system and planar tracking. Watch it below.

The event was concluded by a short breakdown of a Tron’s shot. It was alright, not as great as they were teasing us for it the entire day! especially with so many breakdowns of the show already available online. A better presentation was expected from a successful company such as The Foundry. I understand they need to do marketing for their product, but when you call it a Master Class you don’t expect to hear a sale pitch(for the lack of a better word) which was the first impression of many of the audiences. I think they can hold promotional events and keep the master classes technical and for the professionals. Overall it was ok. It’s important to say that expectations are very high from the Foundry. Maybe if this presentation was from any other company I wouldn’t have been this critical, but Nuke has been a sensational tool and it has changed the industry in many ways and people have high regards and respect for the Foundry. Besides,I got my Nuke badge and T-shirt .. so… can’t complain really! 😉

*The videos are intended only for public use,
Although this was a public event, the foundry has the rights to ask for removal or alterations should they find it necessary.
**This article is only reflecting a personal opinion. It was revised on 11/02/2011