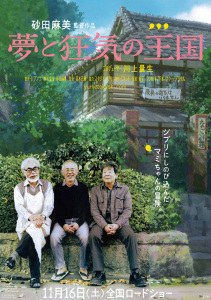 A few days ago I watched a very interesting documentary on the renowned Japanese animation powerhouse Studio Ghibli. I am a big animation fan and no other form of entertainment engages my imagination so vividly, but I can’t even begin to describe how I feel about Ghibli animations and especially the work of one of its founders and master animators Hayao Miyazaki.

Miyazaki’s work makes me feel so many things all at once that is so overwhelming I enter a hypothesized state! It takes me far back to the memories I had completely forgotten and then much further back to the memories I never had! In a way it creates new memories! sounds pretty insane I know! and I’m out of words for describing how much I love and admire their work.

I can’t recall the details but somehow I came across a copy of Spirited Away around 2003 and little did I know my world will never be the same. Since then I have been a devoted fan and watched all their animations multiple times and still do! I doubt I will ever get tired of them! It’s kind of the place I go when I need to escape reality. Needless to say it was devastating to hear the news of Miyazaki’s retirement earlier in the year and the unclear fate of the studio. Fortunately a good friend found about this documentary that was screened at ICA for a limited time and it provided for some most needed Ghibli time in these desperate days!

The Kingdom of Dreams and Madness (2013) provides an unprecedented access to the behind scenes of Studio Ghibli as Miyazaki is working on his last masterpiece The Wind Rises, in a time when his colleague, and in some point mentor, Isao Takahata is also directing his possible farewell work The Tale of The Princess Kaguya.

Directed and edited and even filmed by Mami Sunada, the documentary looks into the history of the studio, its founders and the main figures but keeps the focus on Miyazaki and the production of The Wind Rises, from storyboarding to the finished film. There are some amazing moments as the camera finds its way into every corner and meetings in the studio to witness some invigorating discussions,  as if the camera is one of people there and no one is aware of it, which adds a very nice sense of realism to the whole thing. 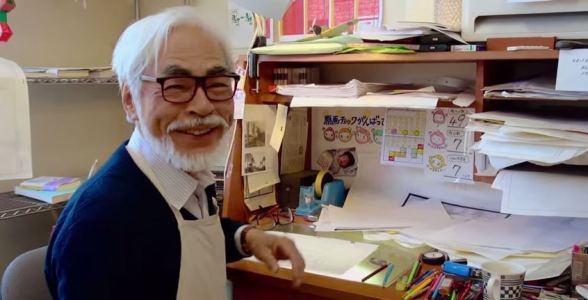 We see and hear a lot from Miyazaki, how he works,  what he thinks and how he sees the world as he is accompanied through his daily rituals. If you’re a Ghibli fan, this is such a treasure toehold! But even for those less familiar with the studio it will make for a fascinating watch. Never before anyone has been granted such access to the studio and Miyazaki himself and I doubt anyone will ever now, which makes this a unique and important piece of film making and something that I’m glad has happened to provide generations to come with an insight to what is beyond the doubt one of (or for me the one) the most amazing animation students in the history. The film finished on such a beautiful and meaningful shot that I’m not going to spoil here for anyone who hasn’t seen it! It’s well worth the watch.

The only thing I would have liked to see more about was on the relationship between Miyazaki and his son Gorō Miyazaki, who is one of the directors at the studio. He only appears in one scene in a discussion with a couple of producers.

It still feels me with deep sadness to think there is a good chance of not having any more Ghibli animations, but as my friend tells me everytime I bring this up, we should be grateful for what we already have, and what a wonderful gift that is indeed.