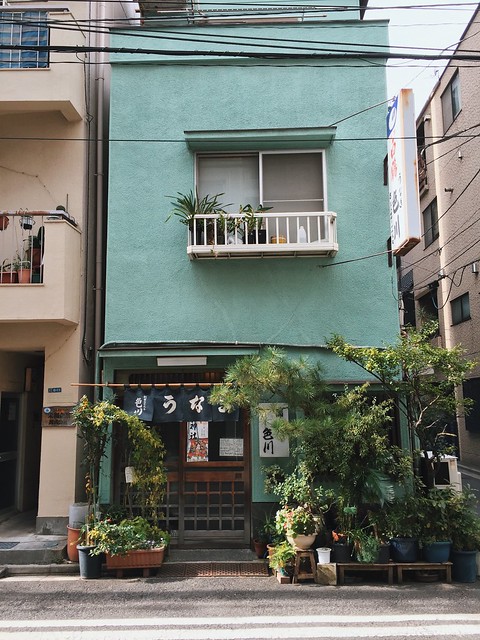 I’m a big fan of Japanese architecture and design. Every culture’s art is deeply affected by their history. What Japanese arrived to as a result of their social and economical development is, for the most part, a sense of simplicity and minimalism. It presents the necessary beautifully and eradicates the unnecessary. Last year in my visit to Japan I keep a keen eye out for signs of that in people’s day to day lives and enjoyed taking a peek into urban architecture and design.

Barbican Centre is currently running an exhibition called “The Japanese House: Architecture and Life after 1945” on Japan architecture during the periods post World War II. It’s a very energetic showcase of different stages of architecture development and how it related to a rapidly changing economics and culture in a nation on their way to become one the world’s biggest industrial powers. The exhibition is divided into different sections providing case studies of different periods and movements influential in Japanese architecture. I am going to go through some of them and share my observations. The order is based on what I saw and not necessarily as it was designed.
Moriyama House

There’s a full-size recreation of the Moriyama House (2005) by award winning architect Ryue Nishizawa the greets you upon arriving to Barbican’s art gallery in level 3. This house is made up individual units rethinking the idea of a house as a single connected space. A garden connects the units together creating a clean & open space. The exhibition being indoor doesn’t allow for the captivating feeling of space being flood by light in this design, but they have tried to mimic the changing light during the day to create a bit of that. The space is decorated with items similar to those found in the actual house. You can also get a better sense of what living in this house feels like by watching Moriyama-san, a film by Bêka & Lemoin, screened on the upper level of the gallery. 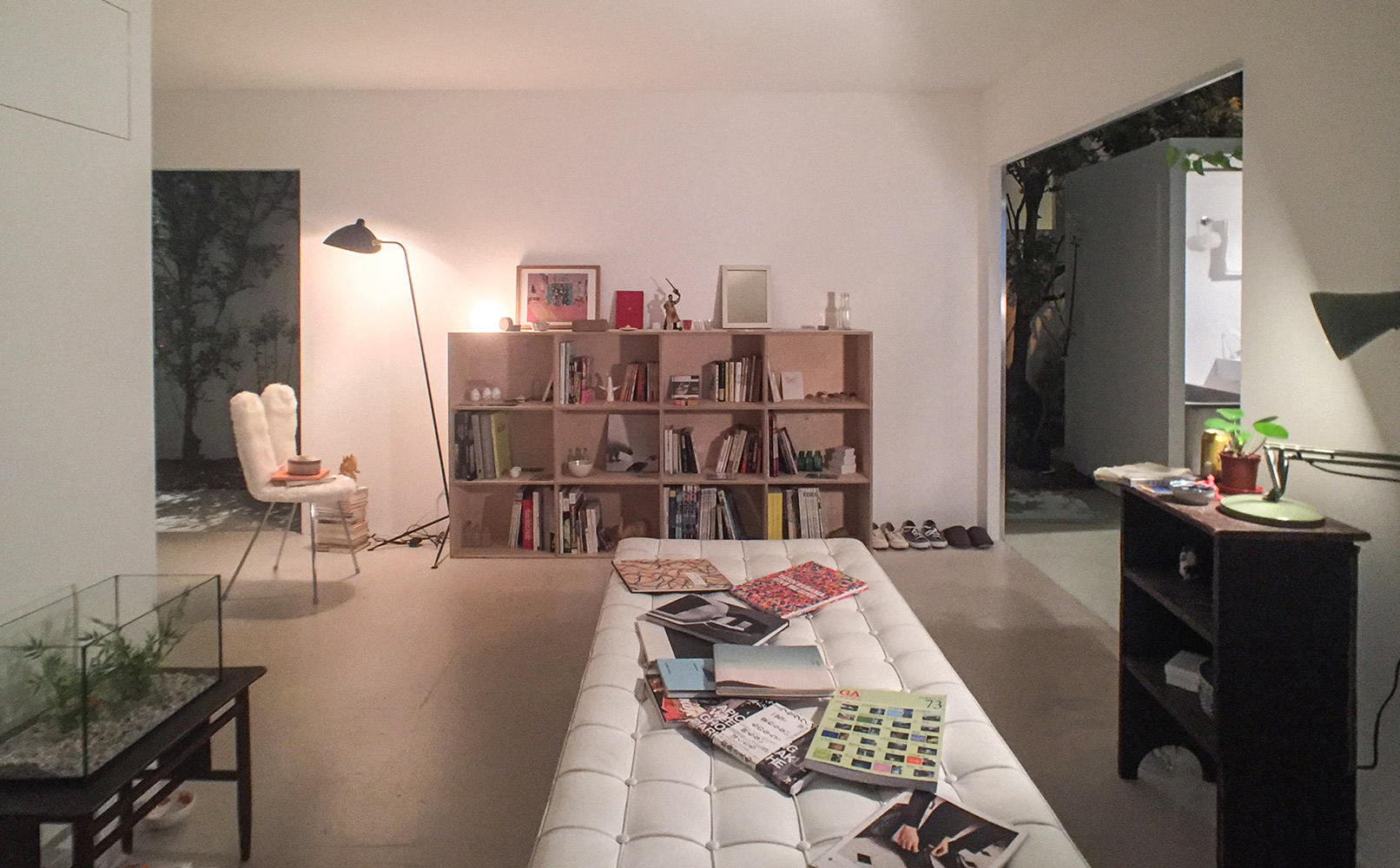 Tea House and garden
Next to Moriyama House, another renown Japanese architect Terunobu Fujimori has designed a tea house and garden for the exhibition. It 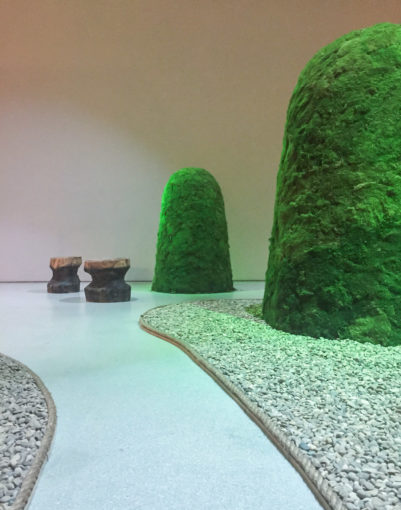 doesn’t resemble those I saw in Japan in form but maintains the Wab-Sabi (a way of thought that values simplicity, imperfection and the passing of time) way of design inherited from Momoyama period when the tea culture in Japan reached its peak.

Lightness
Japanese architects interoperation of lightness, which is one of distinguishing aspects of architecture in Japan from those of Europe, comes down to using materials that are light-weight, and materials that illuminate and create a sense of light. There are models and photos to showcase this concept but one stood out the most for me; House NA designed by Sou Fujimoto. Walled by glass and framed by steel, the tiny rectangular rooms and outdoor terraces each on a separate floor level are linked by stairs, ladders, or movable steps. Fujimoto’s other designs speak the same language of a space filled with light.

Some architects such as Osamu Ishiyama argued the living space design should be in hands of individuals not the authorities and government. Also the short life span of Japanese houses (around 25-38 years) and the cycle of  ‘build, demolish, build, demolish’ promoted an amnesia culture in a consumer society. In this section examples of those who seek to preserve both memories of the past and those who wanted independent and individual expression in architecture are presented. A good example of using architect as a vessel for memory is Zenkai (completely collapsed) house. Japan is a country too familiar with the devastations of earthquake. Damaged houses are often completely abolished post earthquakes replaced by new. Katsuhiro Miyamoto decided to perform a surgery on his house after the Great Hanshin earthquake and restore it.  This was achieved by inserting a steel frame into the fabric of the house to reinforce the damaged wooden structure.  He was able to preserve the memories of the skills and techniques of the original builders, of its former occupants, and of the consequences of the earthquake.

1970s brought a renewed attention to the interior space of the house.  After years of unplanned urbanisation and development, the house could become an alternative reality, an escape from the pressures of the outside world. Architects reimagined the interior space of the house in various ways. An interesting one is Row House by Tadao Ando in Osaka. Axially symmetrical, the entire site has been divided longitudinally into three parts. What makes the Row House so special though is not just the design but the architect’s belief in the need to coexist with nature. The residents are forced to confront the weather as they need to go out to access the bedrooms.

In this section of the exhibition the Metabolism movement of 1970s is explored. The house image of a place for comfort and convention is changed to a place of experimentation.  The caption for this part explains it the best:”For architects, this disenchantment with the preceding generation meant a rejection of Japan’s most internationally lauded  architectural movement – Metabolism. The Metabolist architects, including Kiyonori Kikutake and Kisho Kurokawa, dreamed of a  fusion of architecture and technology, embodied in utopian visions  of cities suspended in the sky or floating on the sea. Expo ’70, the 1970 world’s fair staged in Osaka, was the largest realisation of Metabolist principles to date, with a series of futuristic megastructures and attractions under the lofty theme of ‘Progress  and Harmony for Humankind’. The younger generation, however,  saw only entertainment spaces and corporate pavilions.  The utopian ambitions of the Metabolists were found to be hollow.” Architects questioned what a house should be and created some interesting concepts. See some of them below. 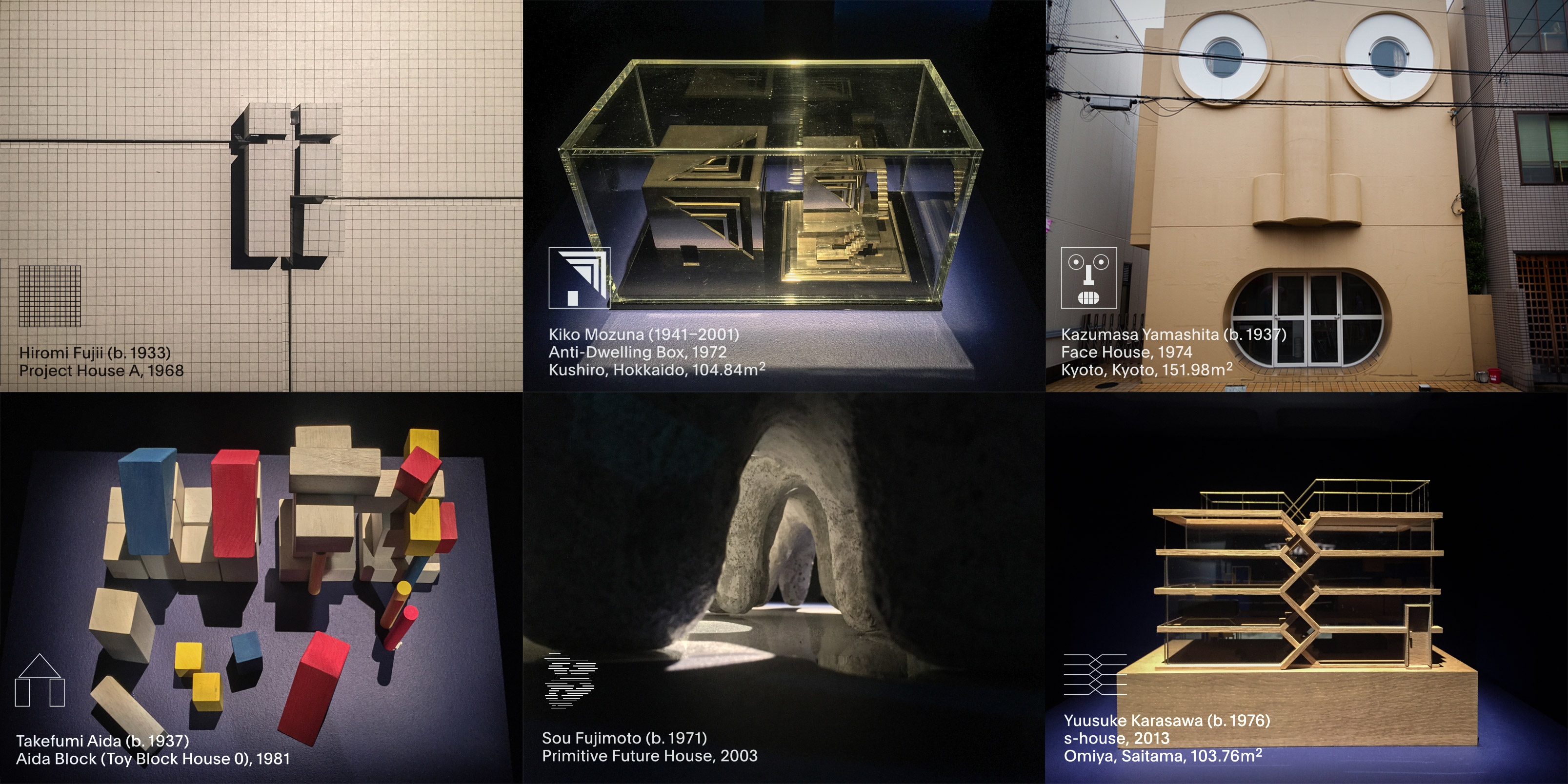 After the allied forces occupation ended 1n 1952, the architecture, being an inseparable part of the modern living,  was a part of so-called ‘dento ronso’ (tradition debate). Japanese were looking back into their roots and architecture was one of the areas looking into reviving traditions and adapting them to the modern culture reorganised by years of war and westernisation. The question was what historical style to go back to in their rich history;

“One was shinden-zukuri, a style associated with Heian-period  (794–1185 CE) palace architecture and characterised by raised floors and open spaces. Another was the style of minka (rural houses), which typically contained earthen floors topped with  sturdy columns and large roofs. The former originated in  aristocratic society and bore an affinity with the modernist preference for transparency and geometry. The latter originated  in the farming and samurai classes and recalled the ancient pitdwellings of Japan’s prehistoric Jomon period (10,500–300 BCE). Architects such as Kenzo Tange and Seiichi Shirai took opposing sides in the search for the root of the Japanese spirit.”- Caption at Barbican.

I just want to mention one of the influential architects in this period that was showcased at the exhibition who I found very surprising. Antonin Raymond, a Czech born American architecture who came back to Japan post war, declared the best respond to post-war housing is to combine the functionalist modernism with Japanese craft. He made his house to showcase the simplicity of an efficient design using the readily available materials and incorporated Japanese carpentry. He admired the Japanese house openness to nature. His wife Noemi called it “the efficient beauty” of Japanese houses: “do away with what you do not need and let the necessary things be simple and beautiful”

The housing shortage post war, forced Japanese to develop efficient and cost effective methods. Modular houses were created throughout periods in 1945-1991 as an answer to the housing crisis. I had no idea Muji is also in the business of creating prefabricated houses. Similar to their other line of products, the designs are strikingly simple and efficient. They offer small huts as well as houses built on site.

Being a country of carpenters thanks to a lot of forests (two third of Japanese archipelago is covered in forests), concrete offered a solution to the wood’s weakness against earthquake. It quickly became a favourite material after it was introduced in 1900. Post war however, architects experimented with the organic qualities of concrete as opposed to its purely industrial appeal. Again some very intresting examples are provided in this section of the gallery but what intrigged me the most was this mountain lodgo by Junzo Yoshimora. Lifted from the earth on a concrete base, it has a feeling of a tree house.

A House is a work of art

One of the benefits of Japanese amazing economic recovery after the war was their ability to look beyond the pure functionality of things. Architects such as Kazuo Shinohara declared that ‘a house  is a work of art’ and encouraged others to use the space to reflect the individuals inhabiting them or the purpose behind it. 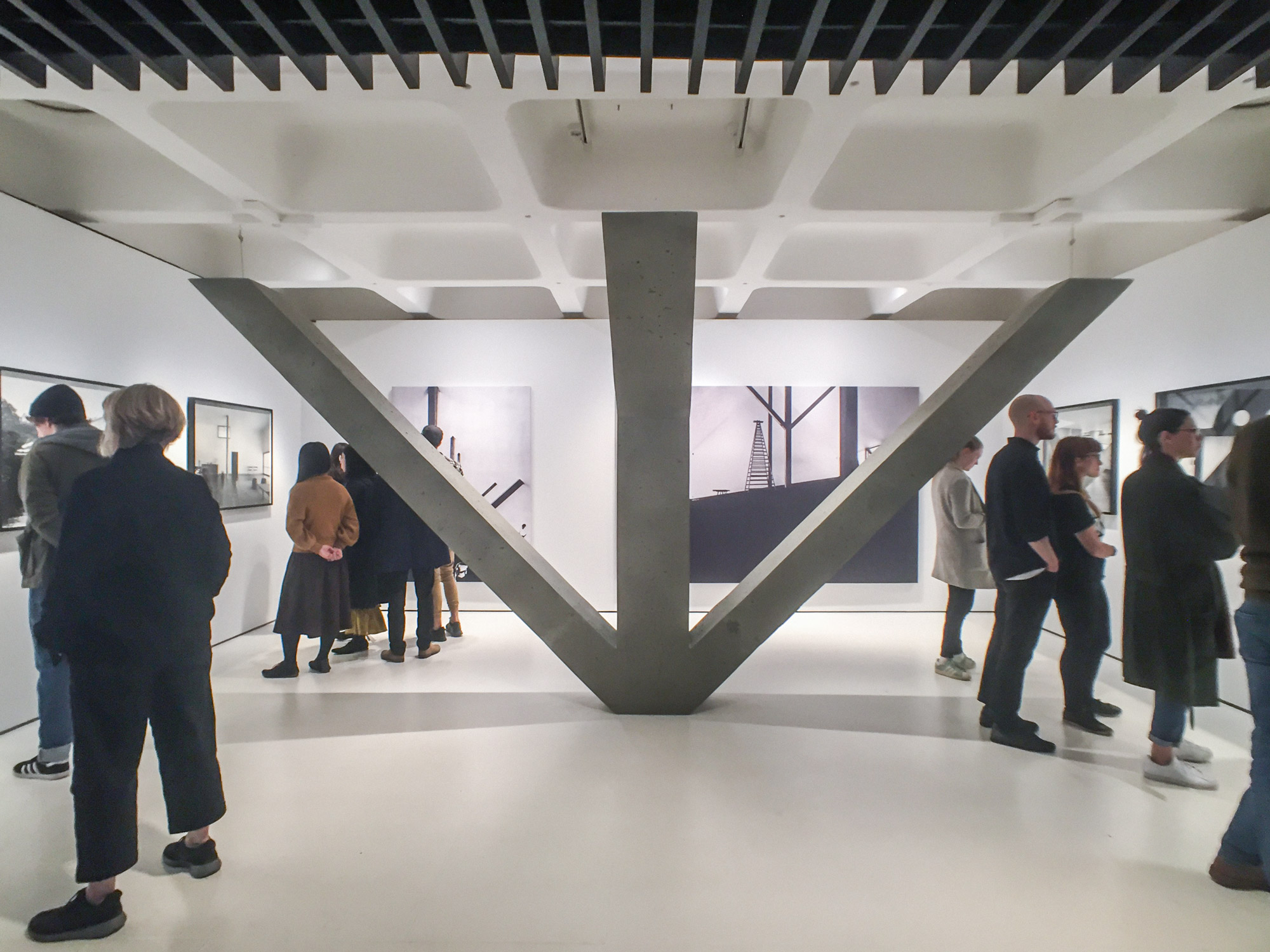 In response to the  effects of rapid economic growth and the bubble era (1980s when the stock and real estate prices soared to stratospheric heights driven by a speculative mania), contemporary architects reconsidered the relationship between the house and city. Aluminium House (1971) by Toyo Ito is one these examples that showcases the architect’s frustration with the state of an industrial and over polluted society. Ito himself considered the house a failed Metabolist attempt. 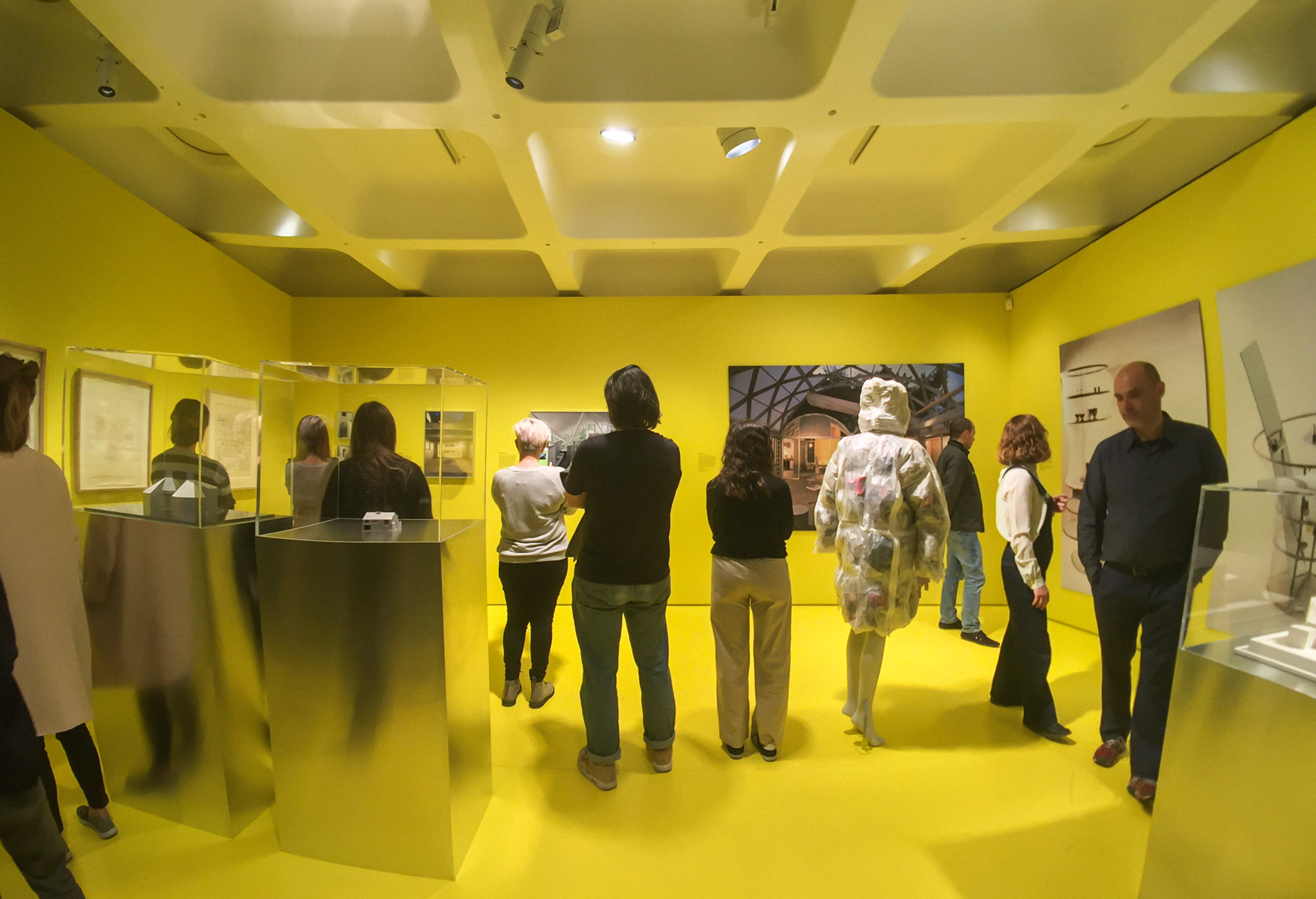 Throughout the exhibition there are screenings of very interesting films, documentaries and animes reflecting the role of architecture in people’s lives and how it affected and was affected by the culture. In this section focused more on domestic space and the fading family values , filmmakers have examined the part that the living space plays in relation to society, culture and individuals.  There are many to name but one that made a strong impression on me was Crazy Family by Sogo Ishii. It portrays a family’s relocation to a new better house leaving their cramped small space.  Things quickly turn for the worse however when they realise the house is infested by termites driving them into a frenzy. You can see the trailer below:

After visiting the exhibition I wished I had seen it before going to Japan as it gave me a new appreciation for the structure of Japanese society. The exhibition is open until 25th of June 2017 and well worth the visit. Even if you are not specially interested in Japanese culture, it still provides an interesting study in war, economic growth and cultural developments and how it affects different aspects of life.