The dream of being able to wirelessly stream or mirror content from any device you are holding to a bigger screen, has been chased by many of us over the years. It’s somewhat strange that despite all the technological advances made, specially in the past decade, there is still no unified system in place that can satisfy this thirst! Not only that, there are practically no complete solutions around even for a closed ecosystem! From Apple AirPlay to Google Chromecast or even the Microsoft Wireless adapter, none will answer all your demands. The best you can do is to pick and choose and use each device for a specific purpose.

When I came across Airtame on Indiegogo back in January 2014, I saw a potential in a device that was aiming for a cross platform solution. Although soon they realised they can’t provide screen mirroring for all devices due to the software limitation imposed by the big names, particularly in mobile, this Copenhagen based startup still had some interesting features that got my attention and I supported their campaign. My understanding was this is targeted for enterprise, company meetings and corporate use, but I was also curious to see how it will handle media streaming. 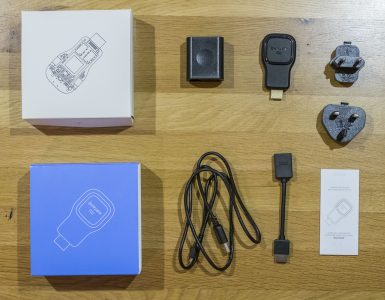 The device came out with the usual delays these crowdfunded projects seem to face, but nevertheless it was eventually shipped to the backers with BETA status. It’s nicely designed and uses a mini USB input to power up. The initial impression was not very good. The software was very patchy and so did the firmware. It was terribly slow and it got very frustrating very quickly. Media streaming was simply out of the question at this point.

I tried it again a few times within a 3 months window. Some updates were released and things got slightly better, but still it wasn’t reliable and seemed too much effort for so little result.

I wasn’t disappointed as I expected this to be the case for a newly released product and as an early adapter, you’ve already opted in to be a beta tester! It however was encouraging to see they were continuing to work on the software and performance. Almost a year later I revisited the little dongle to see what’s new and for the first time I could see the signs of maturity in Airtame.

The software was no longer confusing and unreliable and with a sleek UI and an easy to use set-up process, the interaction was taken to a much more streamlined experience. The streaming speed in the auto mode was great and perfectly adequate for presentations and meetings. This is the area where Airtame can really shine due to a full desktop mirroring support for Mac, Windows & Linux,  also with the added benefit of everyone just being able to stream to any number of the Airtames within the local WIFI network or directly to them. There are also apps for mobile providing some limited streaming options that could be used for presentations. 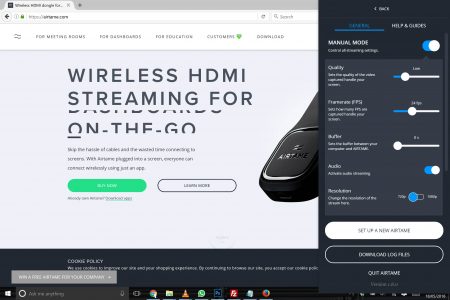 Next step was the media streaming and as expected Airtame was not able to handle it and I don’t think it ever will. Even connecting to the device directly to avoid the possible WIFI network performance issues, the frame rate was 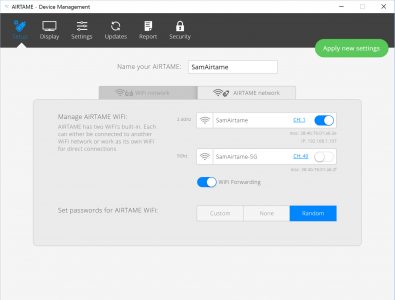 slow. Setting to a higher quality would simply render it completely unusable making me wonder why there are even such options in place, maybe for a next generation device?. One positive to mention here is when set to auto, although the frame rate drops, it manages to keep the audio synced to the image pretty successfully, so if you find yourself forced to play a video clip in a presentation, it could just barely pass.

The desktop application can still be refined further. Right now there’s a nice modern UI to control the streaming with access to some settings over the quality, but to see the advanced settings a new window will pop up. I think it will be better if all settings are contained within the more modern UI.

The dongle discovery still seems a bit patchy and you have to enter the ip address manually sometimes. While the performance is significantly better, there are still occasional disconnects and freezes.

Is Airtam the WIFI hdmi dongle of the future? I don’t think so, but it does provide a pretty good solution for a specific section of the market and it does it well. I’m sure the performance will be even more improved over the time and there’s a lot of room for Airtame to grow and increase it’s market share in other areas such as education. 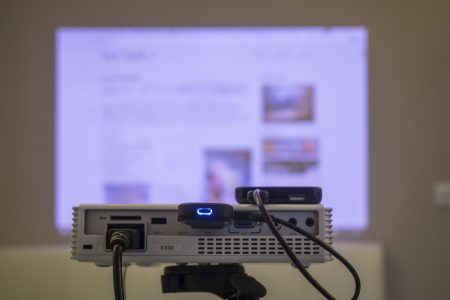