This is week is the last chance to see “Imagine Moscow” exhibition at London Design Museum. Imagine Moscow provides a rare opportunity to see unrealised ideas and architectural designs of the post October Revolution era in Russia and their efforts in reimagining Moscow. It is centred around six projects introducing a theme relevant to life and ideology in the Soviet Union: collectivisation, urban planning, aviation, communication, industrialisation, communal living and recreation. Architecture was utilized as a tool to show how the revolution can change and shape the society and people of Russia found no limits to their imagination.

Russia’s history of political conflicts specially in recent times has alienated an ambitious & creative nation whose absense from the contemporary arts playground is nothing short of a loss for every design enthusiasts. In this post I’m going to write a little about some of the highlight of this exhibitions for me with my own added afterthoughts.

1- Propaganda Shells: During the WWI and the following civil wars in USSR, artillery shells were used to distribute propaganda. What perhaps now feels like a dystopian image of waking up to thousands of propaganda papers falling down has already happened in history and that is terrifying! Apparently airborne leaflets have been used for military propaganda purposes at least since the 19th century. One early example is from the Franco-Prussian War and others include WWI and II and not just by the Russians. “The British dropped packets of leaflets over German trenches containing postcards from prisoners of war detailing their humane conditions, surrender notices and general propaganda against the Kaiser and the German generals”. (Source: Wikipedia)

2- The Maxim Gorki plane: The Tupolev ANT-20 was built in 1934 in celebration of 40 years literary achievement by the soviet union’s most famous living writer Maxim Gorki. Gorki was one of the founders of socialist realism which glorified depiction of communist values. The plane, the largest of its’ time, was used to distribute propaganda. Amongst the equipment’s on board there were a rotary press that could print 10,000 copies per hour, a photo development lab and a giant cinema screen to be used when landed that could accommodate up to 10,000 people. You can see a amazing footage of the flying monster here.

3- Cloud Iron: El Lissitzky was one of influential artists in the Russian avant-garde. His vision for rebuilding Moscow post revolution was based on inventing a new type of building. He envisioned a network of skyscrapers around Moscow’s Boulevard ring. On one hand, using the space above was to address the overcrowding situation in the city but on the other hand, Lissitzky similar to his comrades was moved by the idea of inserting supremacist and constructivist forms into everyday environment to symbolize the transformative power of revolution in society. He called his designs “Wolkenbügel”, a German term literally meaning hanger for the clouds. Interesting side note, before the term “skyscraper” became widely used, there was another name for tall buildings: Clouds Presser!

4- Suprematism: It’s worth briefly mentioning the Suprematism movement here. “It is an art movement, focused on basic geometric

forms, such as circles, squares, lines, and rectangles, painted in a limited range of colors. It was founded by Kazimir Malevich in Russia, around 1913, and announced in Malevich’s 1915 exhibition” (Source Wikipedia). There are some very interesting work by Ilya Chashnik one of the Supremacism figures in the exhibition that showcases this ideology.

”. Radically simple & beautifully sophisticated, it is the story of two squares on the mission of rebuilding the world. It’s yet another example of Suprematist and I wonder how it influenced of the mind of children in 1920s Russia .

6- Posters were a big part of Russian propaganda and there’s a delightful selection of them in this exhibition. One that shows an interesting part of Russians post revolution history is called “From darkness into light” by Nikolai Kogut (1921). Vladimir Lenin saw the poor literacy rate of the public as a threat to the future of the revolution and set out to eradicate illiteracy and all people from 8 to 50 years old were required to become literate in their native language. 40,000 liquidation points were arranged to serve as centres for education, and achieving literacy. 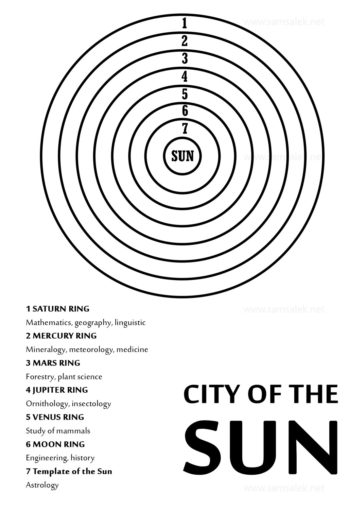 7- The City of the Sun: Russians looked to outside world for inspiration as well and one of the ideologies that resonated with the early soviet’s aspirations was the work of the Italian philosopher “Tommaso Campanella” called “The City of the Sun”. It’s a fascinating book but what Russians were most inspired by was the city’s depiction of their citizen’s desire for knowledge. It is symbolized by the City’s concentric architecture modelled on the Solar System with each of the circular walls dividing its’ sections painted with images imparting knowledge from the arts and sciences. This also inspired many artworks notably the work of Ivan Leonidov the constructivist artist.

This is a very compelling and well curated exhibition and for me was a window to the Russians’ history and art I didn’t know much about.