When Nexus 4 was released, many believed that the only thing stopping it from becoming the Android superphone as well as the best phone of the year was the camera. Although in my opinion it wasn’t really that bad and I did manage to capture some very nice photos during my time with it and grew to like it, comparing to iPhone and Nokia phones it was definitely years behind.

After almost half year of rumours with expectations building up, Nexus 4’s successor was finally announced and released this October. As expected Google has packed Nexus 5 with the latest and greatest hardware available putting it in line with the best Android phones of the year such as Samsung Galaxy S4 and HTC One. Now the question that many are asking themselves is if the camera any better.

The quality of the new Nexus phone’s camera could be a very decisive factor for people to upgrade as Nexus 4 is this still quite a capable device and very fast phone. The short answer to that is yes! Nexus 5 has a better camera and to find out how better I have taken some sample photos comparing Nexus 4 camera with Nexus 5’s in different lighting conditions. These photos were taken using a Nexus 4 16gb phone with Android version 4.3 installed versus a Nexus 5 32gb model with Android 4.4 to on board. Let’s look at the images.

Right of the bat Nexus 5 exhibits slightly sharper and more vibrant images. Nexus 5’s 4.0mm (33mm Equivalent) lens is slightly wider than 4’s 4.6mm and works better for general photography providing a wider view. The fstop also seem to have improved. Google has not revealed this information but from the photos I’ve examined it seems to me Nexus 5 has a wider aperture of 2.4 comparing to 2.7 on Nexus 4, a change although small will help taking better photos in low light. 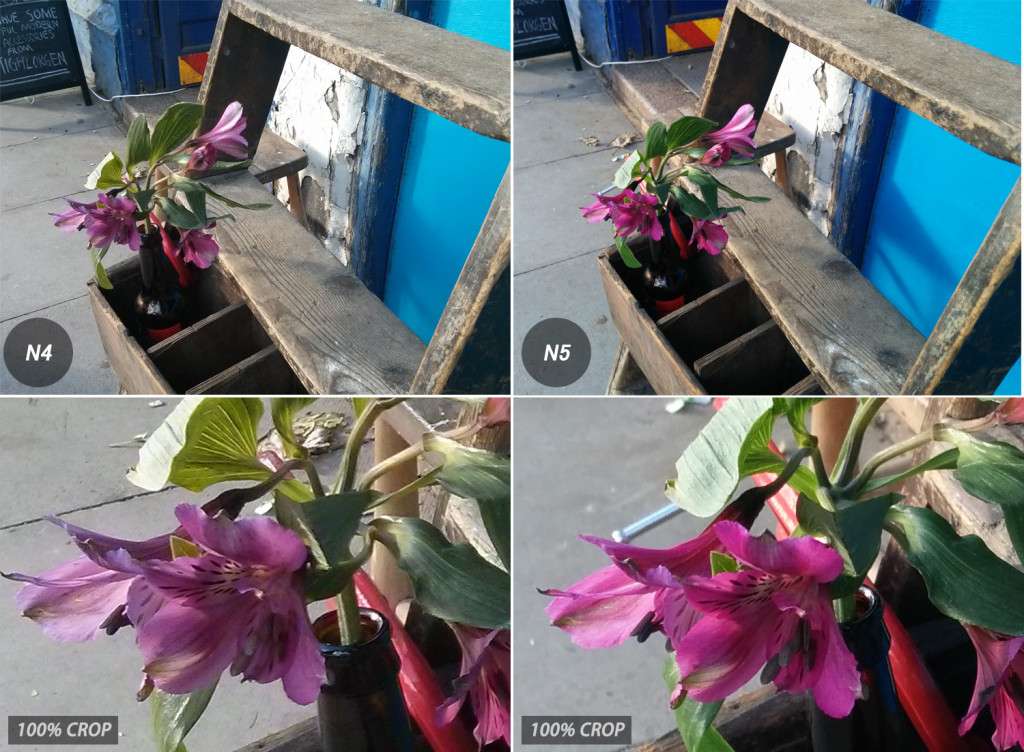 Since there’s no manual control there’s no way of selecting the exact same settings for a true comparison and we can only rely on auto mode. Photos on Nexus 5 are generally coming out with more saturation and contrast which is a good thing actually as Nexus 4’s images tend to look a little washed out. 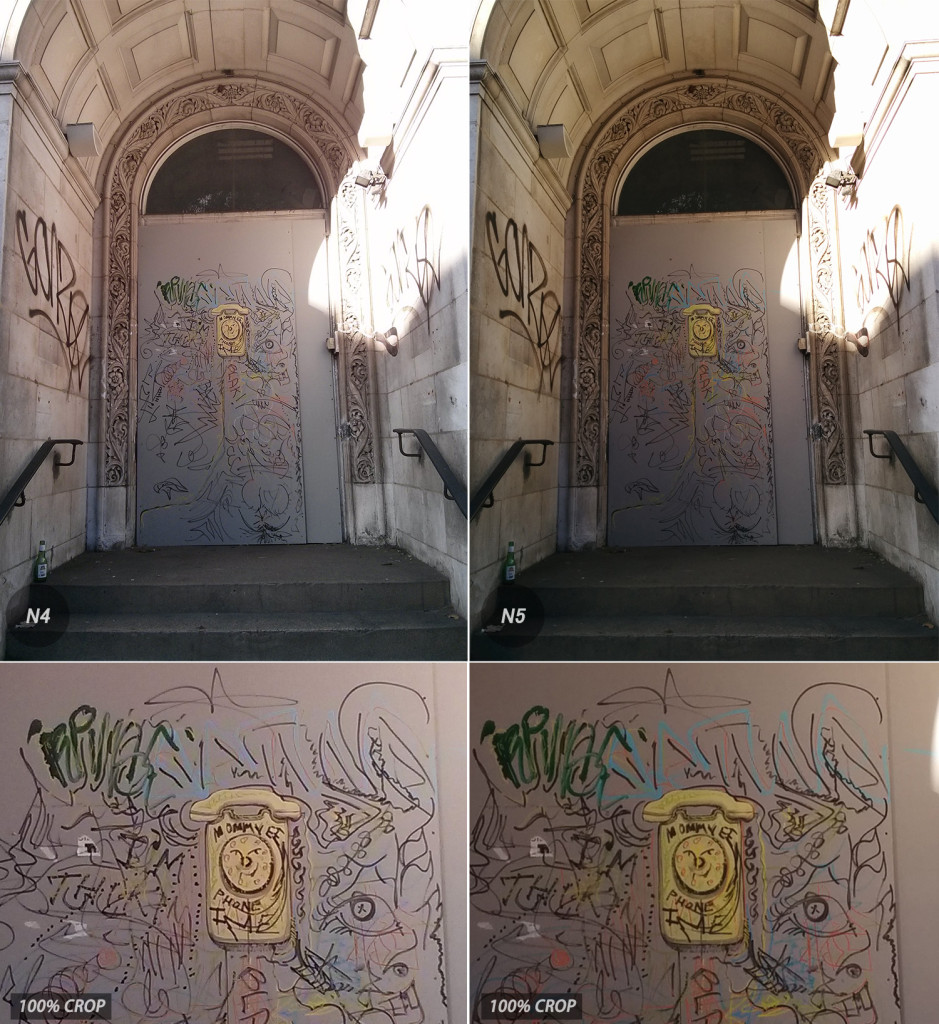 While both cameras seem to provide a decent level of details, Nexus 5 is doing a better job of colour balancing and visibly better noise handling. 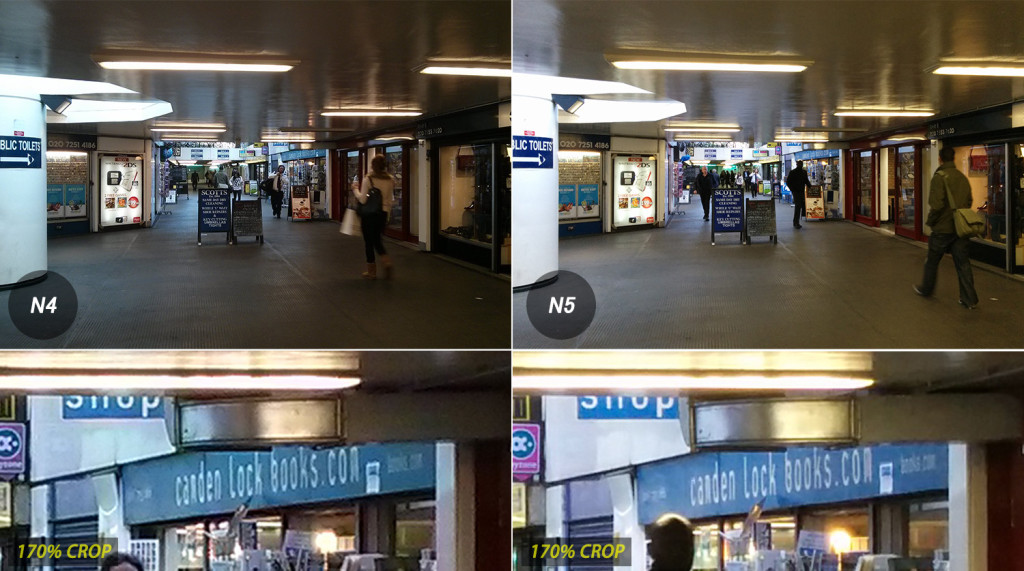 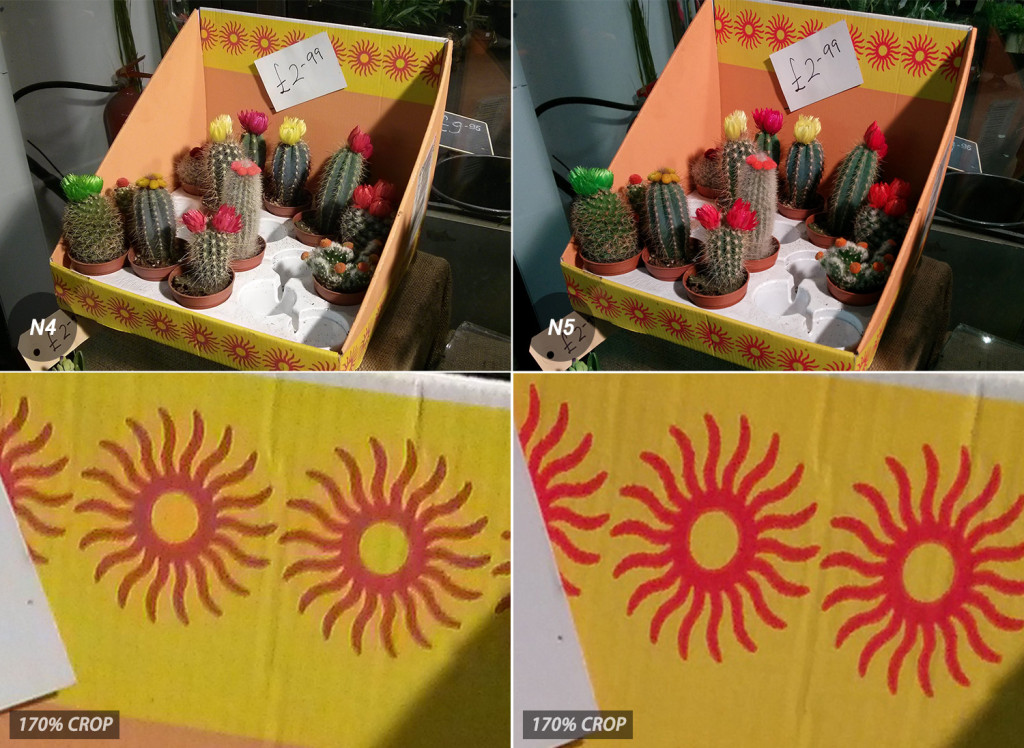 Where Nexus 5 really begins to shine and takes the lead is when it comes to low light conditions. Images are generally brighter with reasonable level of details and sharpness and much less noise comparing to 4’s. 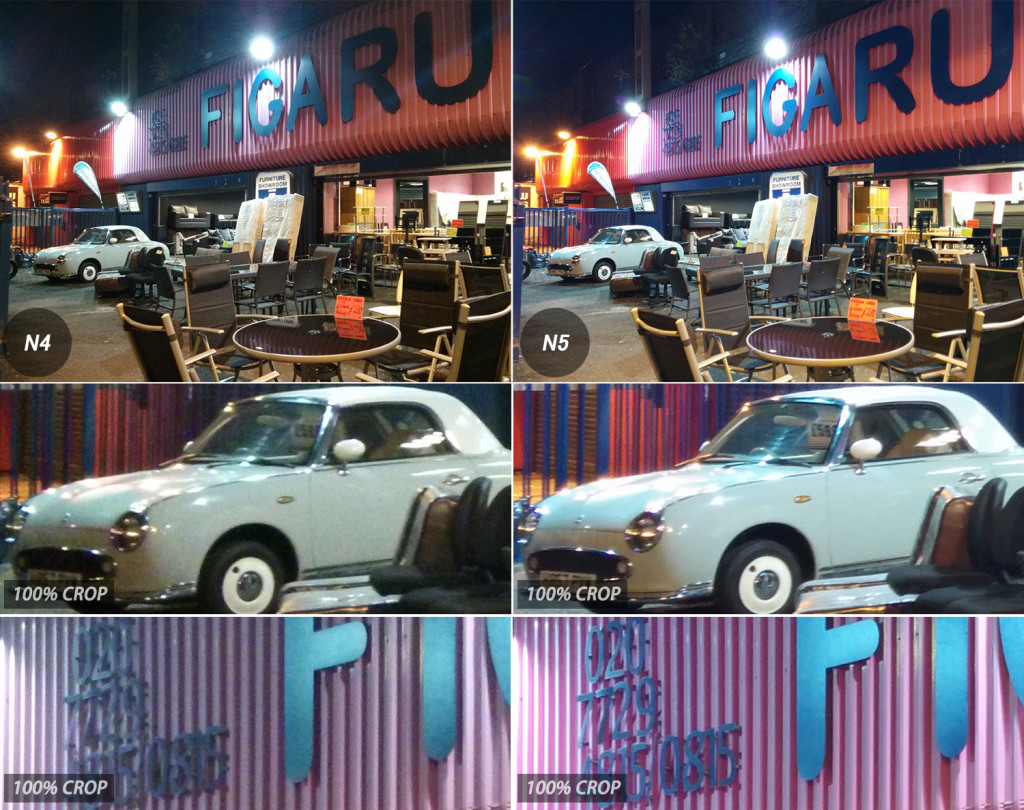 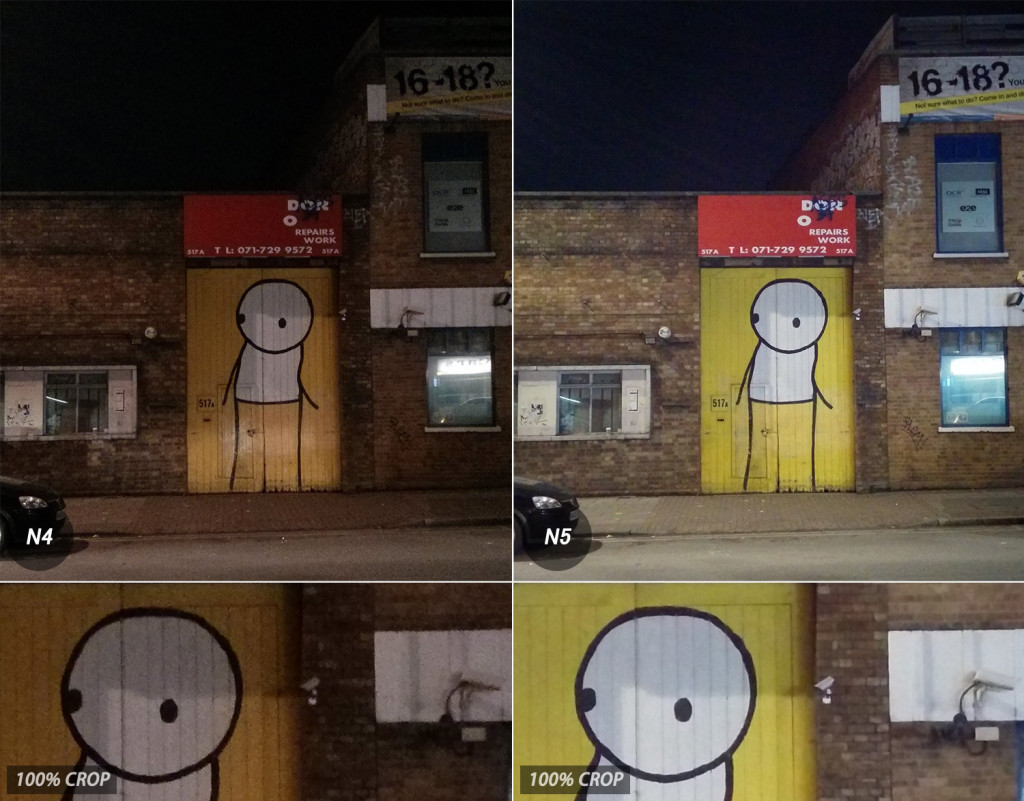 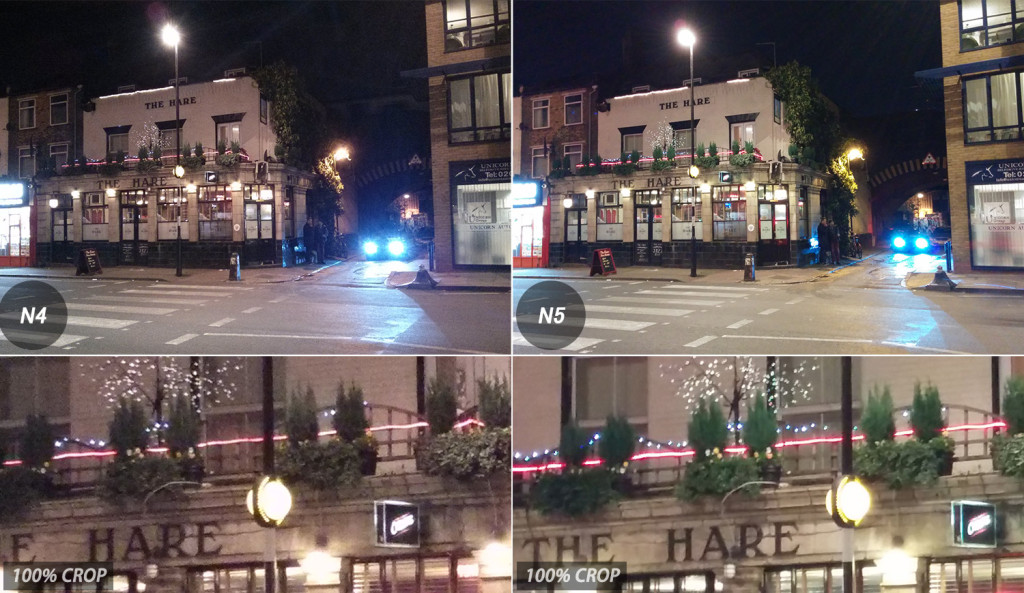 As you can see from all the examples, Nexus 5 is clearly doing a much better job in the night time and the photos are pretty good, well, comparing to Nexus 4 that is! Still it’s good to see the improvements and the new camera is definitely above average now with this upgrades.

HDR+ vs HDR
Andriod 4.4 Kitkat features a new HDR mode called HDR+. It’s supposed to provide clearer images at night and vivid-er ones in daylight. I am a big fan of Nexus 4’s (Andriod 4.3) HDR mode. It does a beautiful job of balancing the highlights,mid-tones and shadows creating an even image even under the harsh sunlight. Photos that will look fantastic with a touch of colour grading, so I was expecting to see that improved in the new Nexus. Sadly that is not the case, just look at these photos by side by side, Nexus 4 and Android 4.3 are clearly the winners here and for some reasons HDR+ ,while improving the highlights, is burning out the details in the shadows reducing the dynamic range and flexibility of the image for post work! 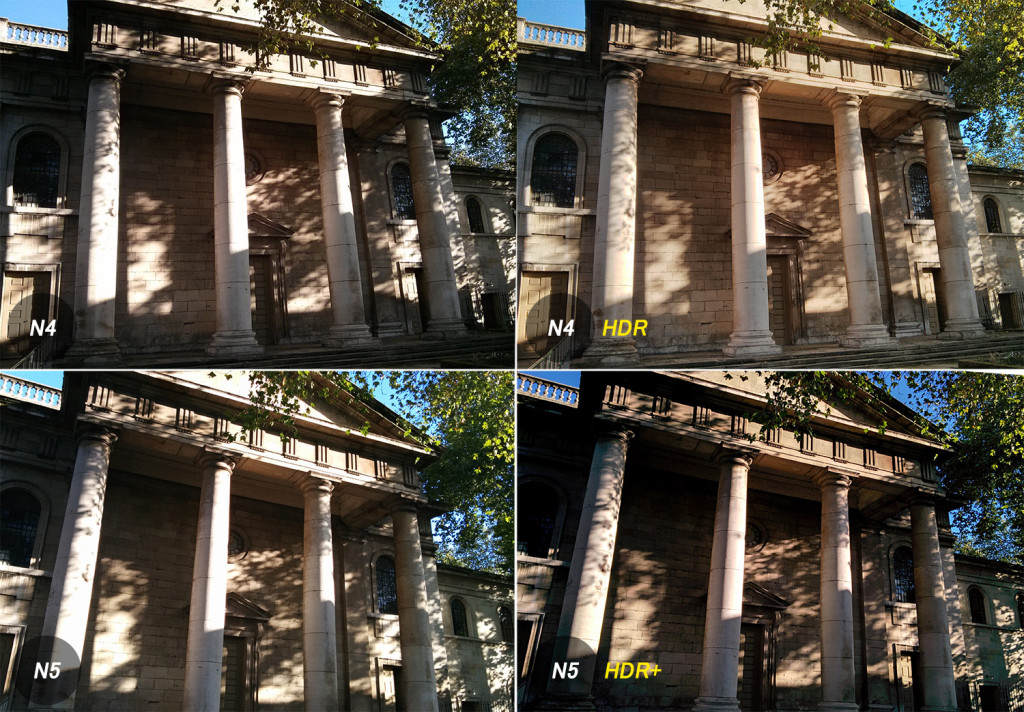 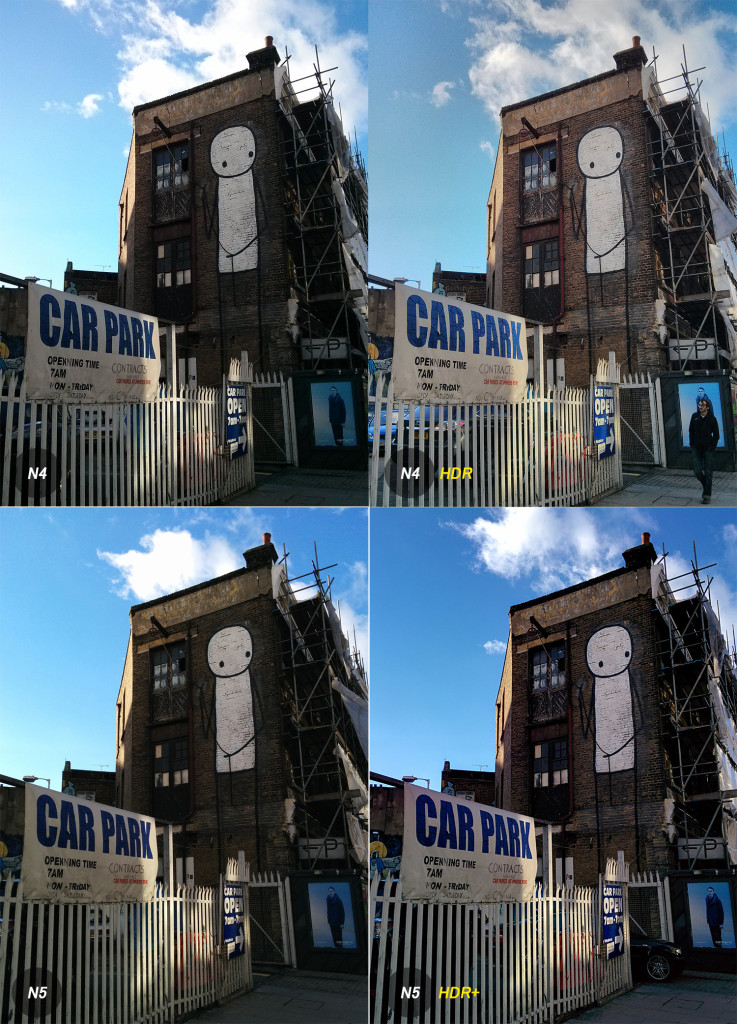 I hope Google will improve HDR+ as frankly at the moment it’s useless! It’s not getting any better in low-light mainly with burned out highlights and softer images, but because of OIS and brighter lens, unlike Nexus 4’s that needs to be quiet stable to avoid a blurry image when shooting in HDR mode during the night time, 5’s is quiet fast, but you can clearly see from the samples that HDR is creating a much more balanced image. If anyone from Google is reading this! please revert it back to HDR for the time being! 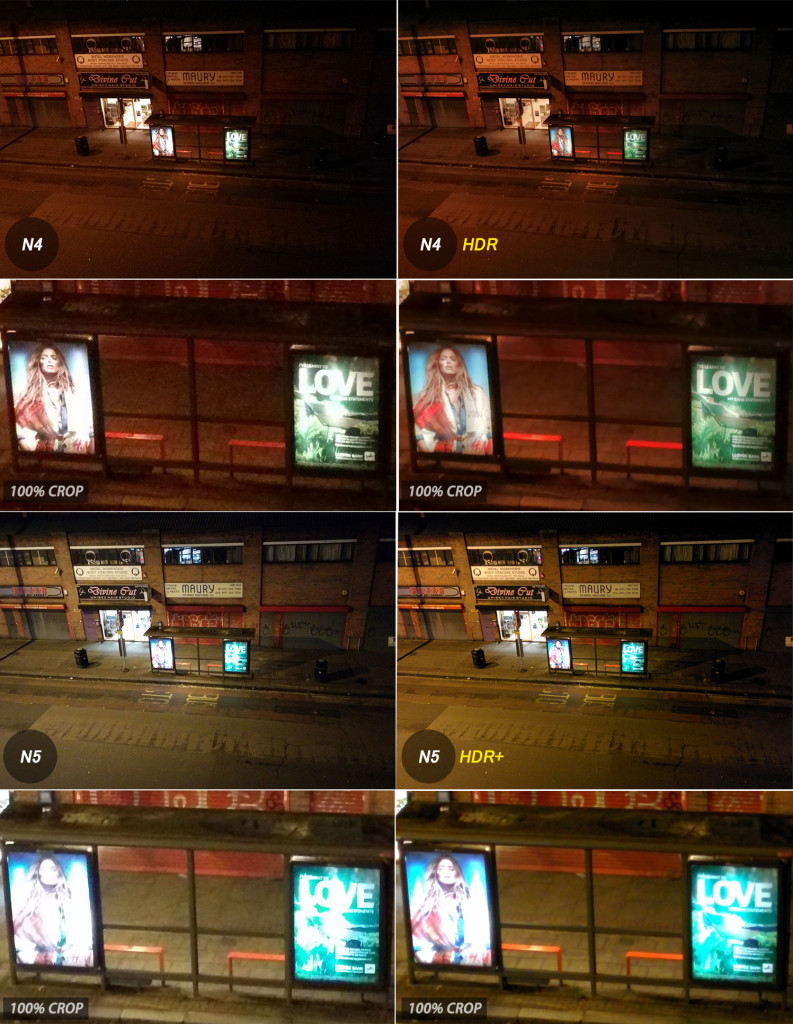 Panorama & Photosphere
The Panorama mode result is almost identical. Nexus 5 enjoys images with more vibrancy & contrast here too. Same goes for Photosphere, although initial impressions are Nexus 4 did a better job of stitching photos together, it’s hard to know however as a good 360 degrees image requires a lot of patience and just a couple of test images won’t be sufficient to make a call.

Flash
After taking some samples shots I’ve noticed that the Nexus 4’s flash is stronger which could be good and bad, more good as with a more intelligent auto mode that power can be put to good use! if I had to pick I would go for Nexus 4. I also like the slightly warmer images from Nexus 4, but this is just a matter of opinion. 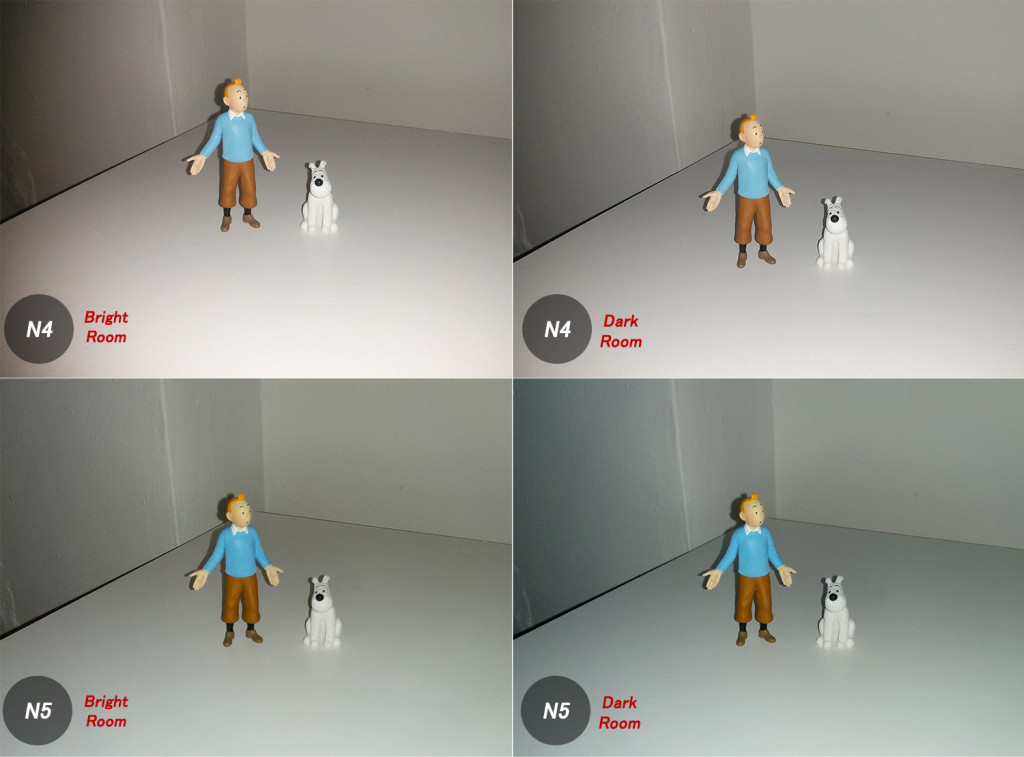 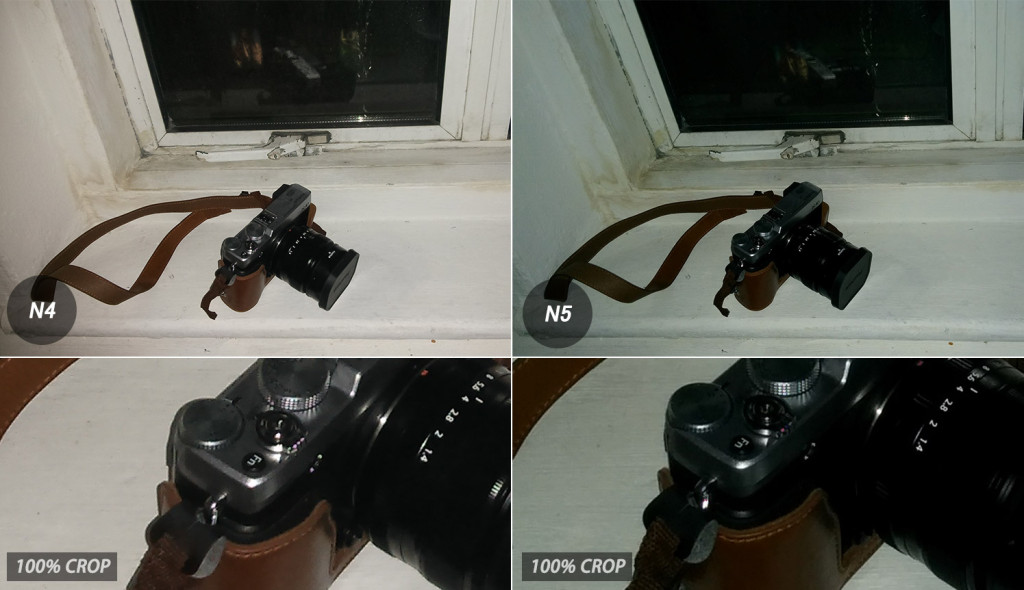 Nexus 5’s camera while improved, is still far behind the competition. The software is still feeling very slow; both launching & focus time, and doesn’t provide enough controls. As a matter of fact if Google manages to improve the software that will go a long way toward putting Nexus 5’s camera in a much better position.

On the bright side the camera is better comparing to Nexus 4 with improved low light performance and noise handling and takes more vibrant photos. I still like the HDR mode in Nexus 4 better both in day & night time as it creates much more balanced images and despite HDR+ being faster in Nexus 5. Nexus 5’s bigger,brighter and sharper display makes a better viewfinder therefore taking photos are more pleasant and the thinner body feels better when holding the phone and snapping away. The faster CPU in Nexus 5 helps when editing your photos afterwards on apps like Snapseed, the speed is very noticeable.

Ultimately the overall quality of the photos are better in Nexus 5 thanks to the better optics and image stabilization but if you don’t take many photos with your phone, the difference is not enough to justify an upgrade. It feels to me that the hardware has improved and there’s a much better camera on board of Nexus 5 but being let down by the software, hopefully something that Google will improve.